At some point in my practice I decided I wanted to be the perfect uke. I’m still far from reaching that goal (very far); but, that thought helped me change the way I was training – for the better, I think. Now, it begs the question of what the definition of a perfect uke is. Furthermore, what does uke mean?

A formal way to define uke is the person who receives the technique. The uke initiates the action by attacking and then receives the technique from their partner. This action is called ‘taking ukemi’ and its main purpose is to protect the uke at all moments when receiving the technique. It’s a skill on its own and is appreciated by the shihans when teaching. You might have heard of Tamura Sensei being one of O’Sensei’s favorite ukes. Or, ukes recognized in the western world in more recent times, like Donovan Waite, Peter Van Marcke, Vu Ha, Tod Martin, Jaime Khan, John Chiarolanzio, Mike Jones, Stephanie Cook, and Sam Taitel among others. 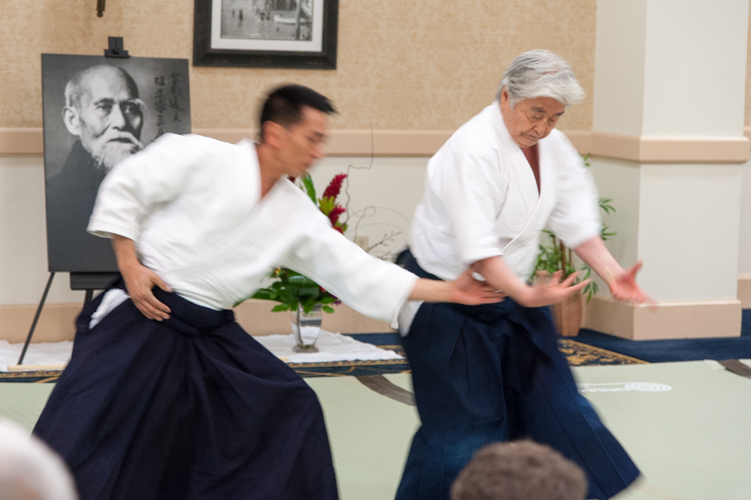 In a recent seminar, sensei Bruce Bookman (from Seattle, WA) said that the meaning of uke is to absorb. I had asked him what was the perfect uke. He said that uke needed versatility. The great ukes respond to their partners with openness, honesty, and commitment to keep a connection with their partners. All this while protecting themselves. Or from another point of view, protecting themselves thanks to that open, honest, and committed connection.

When I decided to become the best uke I considered my physical limitations. My quest has to do less with the big falls and flying around (simply because I cannot do those things) and more with being honest and connected. There are some aspects of ukemi that I want to avoid at all costs. Having done them while I was coming up, and having trained with people who still do them, these approaches to ukemi had to go. For the aspects that are worth keeping, here is a non-exhaustive list.

The first aspect I’m interested in is to show I’m alive. When I was a beginner, my way to take ukemi was laying down on the mat as soon as possible so my partner could do the pin. Later, I started to take more time following what my partner was doing. The other side of this, in its extreme, is to resist at all cost and not allow your partner to throw you. This could be because of fear, having a recent injury, feeling you are ‘better’ than your nage, trying to ‘teach’ something to nage, having a bad day, or just simply being an asshole. Today, I try to follow my partner wherever she/he takes me. That means that if they do not take my balance off I do not roll; or, I do stand up if they give me the chance. I also try to be open to feel where they are taking me. Which brings me to the next point.

Keep the ukemi honest. I don’t want to assume that I should follow certain direction when I’m taking ukemi because the technique was demonstrated that way. As much as it’s expected of the nage to do what the instructor showed, my job as an uke is to be versatile and able to absorb whatever the nage is doing to me. I think that Osawa and Shibata senseis show different techniques when demonstrating in a seminar not to confuse the students, but to keep the uke honest. During a demonstration, when the instructor calls an uke, uke doesn’t know what the technique is the first time she/he attacks. After that, they have a better idea how to follow the instructor. This is not necessarily the case with Osawa sensei. He will change what he is doing so, I think, the uke has to be prepared and responsive, because each attack is the start of a new technique. The uke doesn’t know what it’s coming. The moment we assume what nage’s next move is we lose responsiveness. We lose honesty in our ukemi.

I think this is a very important aspect of ukemi. During regular class, Sugano sensei used to teach two or three openings or techniques for one attack. He insisted that we did this to uke in random succession, so we could help uke to be attentive and responsive. You cannot predispose your body to a certain fall if you don’t know what the nage is doing next. If you do, you are prone to injury. It’s not smart. It’s not easy. This is a big one for me. I try to be honest when I take ukemi. Emphasis on try.

Be respectful to your nage. Nage is in their own path to learn. If we want to help nage grow, we have to take our ego out of the process. Teaching what we think is the right way to execute a technique by resisting might be more an expression of our ego than simply helping out. The uke who only follows when she/he thinks the technique is done correctly, and this means correctly in their mind, is doing a great disservice to their partner. That approach is reserved only to Shihans and the instructor who is teaching the class you are taking. You shouldn’t have that purpose when you are the uke. It is true that there are circumstances when this doesn’t necessarily apply, like when you are training with a beginner. But even then, I do double-check my state of mind and my attitude to be sure that it is not about me. Which it shouldn’t be. Resisting is easy when we know the technique.

Be free. I think this is the final objective. When I take ukemi, I want to be free of fear, ego, what a crappy day I had, ‘what is for dinner?’, ‘mmm, that new student looks cute’. I want to be one with the universe. This is not an easy feat, and more often than not, I tell myself ‘Mmm, maybe in 10 more years …’

In a chat with Bookman sensei, he mentioned that ukemi might have different goals depending on for whom and when you are taking ukemi: “When taking ukemi in front of class, we are trying to help nage get his message across. In practice, we are trying to keep nage honest and be a reference point for our partner to get an idea of how his practice is going.” He also brought an important point about the absence of competition in Aikido. He thinks that “it’s up to the uke to adjust the pressure of practice so that nage’s skill continues to build in terms of speed coordination and kokyu.  It is a sensitive process to find the line between resisting the technique and being too compliant.” Bookman sensei ended by saying “Since we don’t have competition to weed out techniques that are not practical or to show us where the weak points are, it is up to the integrity of both uke and nage to make the practice useful.”

So, the road is hard, winding, and long. I am getting older and cannot follow as fast as when I started, which is when I had no idea how or why to follow. To be the perfect uke, I have no choice but to work the principles within my limitations. I think practice makes you perfect. But it has to be a good, focused practice, like Sugano sensei used to say. Honest practice.