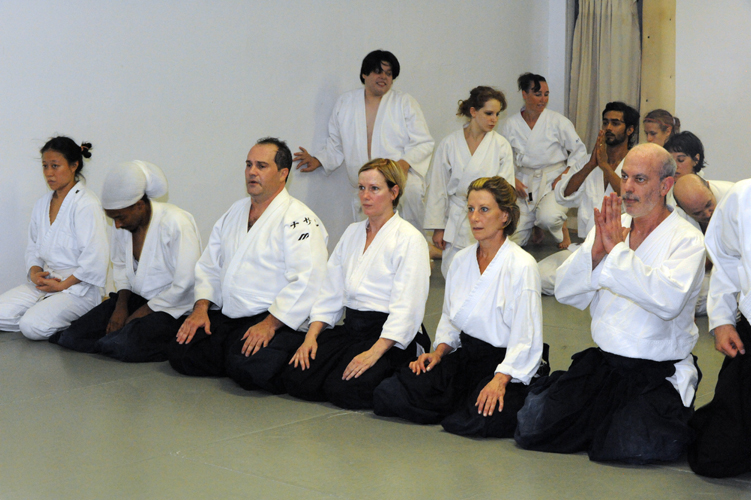 Deshis waiting for Sensei to walk on the mat

This is not your basic level etiquette in Aikido article. There are already many such articles devoted to its basics. I want to go a step deeper, if you will. Consequently, ‘201’.

Etiquette is no other thing than manners. Each society has its own rules of propriety. Burping during dinner could be seen as disgusting or as a compliment to the chef. It all depends at whose table you are sitting. In Aikido, a Japanese martial art, the rules of propriety we follow are based on Japanese culture. The way I approach etiquette in Aikido is based on two main concepts of traditional Japanese culture. These are hierarchy and humility.

The basic rules of hierarchy in Aikido are the relationships between a sensei and her/his students and the relationship between students. The relationship between two students is defined by the concept of seniority. Sempai is the senior student and kohai is the newer student. Basically, when you just join the dojo, everybody else is your sempai. But this is a one-to-one relationship. There is a basic awareness a deshi must have about who is her/his sempai. Identifying the relationship could be tricky, especially when somebody joins from another dojo, is a visitor, or has advanced in rank at a different pace than our own. If in doubt, go for humility.

I show I’m humble to my sempai and I allow my kohai to show they are humble. I do not make others accept my deference towards them and I do not make others show deference towards me. As in regular training, I want to work on my path and not on my partner’s. I give myself to my partner so she/he can practice, but I am responsible for my own growth. I can only open myself to learn if I approach my training with humbleness.

The etiquette rules are not a mandate. You can choose not to follow them. But doing so, will portray you as a rude person and nobody likes a rude person. If you want to learn Aikido, following etiquette will help you because it will bring you to a state of humbleness that will open yourself. There is another reason to make your responsibility following etiquette at your dojo and especially as a visitor in other dojos. Your actions reflect on your sensei. If you are impolite, your behavior will reflect on your sensei. And if you are a true student of budo, you DO NOT want your actions to reflect poorly on the person you consider your teacher. The key words here are true student of budo.

I want to illustrate the deference to a sempai with some examples. In some dojos, specially small ones, the line up in front of the kamiza at the beginning and end of the class is arranged by grade and sempai/kohai status. In big dojos, with a lot of students in each class, this can become impractical. For this reason, Yamada Sensei doesn’t mind students sitting in any arrangement. I think he even likes lower rank students sitting further up so they can see the technique better.

Deference to a sempai is given when partnering or in line. One attacks first so the sempai can execute the technique first and, in a way, help the kohai if she/he has any doubts about the technique. In a line, an advanced deshi shows respect to a sempai by not correcting kohai. I want to defer any technical advise to the highest ranking member of the line. If that person is not correcting a less advanced deshi, is not my place to do so. I defer to all my sempais in line.

When I sit in seiza at the beginning or end of the class, I do not align myself with my sempai, but try to sit a little bit behind. I want to show humility. I learned this while taking a picture of a visitor with Sugano sensei in front of the kamiza at the New York Aikikai. The visiting deshi moved a little forward from sensei to get, in her words, a good picture. After the picture was taken, a senior deshi, who noticed what happened, told us that we should never sit ahead of the line where sensei is sitting because we are not showing our respect that way. I don’t think Sugano sensei noticed or cared, but I learned something that day.

There is another example of how to show our humility. This is when testing for shodan. Many deshis test for shodan away from their dojo, usually at a major seminar. They bring their hakamas to wear the day after the test. Is this bad? It’s not good nor bad. It’s all linked to the consciousness behind our actions. If I’m taking the hakama with me to the seminar where I’m testing, that means I’m assuming I’m going to pass the test. I could be more humble and make no assumption. Just wear the hakama after I go back to my home dojo, or after the seminar is over if the test is in my home dojo.

You can follow the basic forms of etiquette without knowing the reasoning behind. That could be an empty gesture, even when nobody else would know to understand it as such. But, if we are conscious of our actions and open ourselves to train and behave with humility, we will not only change our practice for the better, but we will be able to learn from the most unexpected of our partners.